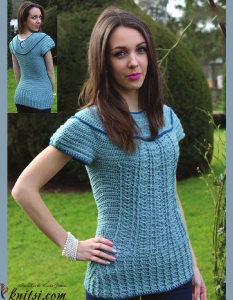 Needle and thread to sew on button

Pattern is worked from the top yoke down to the bottom hem.

Sl st into first htr of round 6 to begin working in the round, turn.

Next Rnd: In CC, working into the front loops only, 1ch, dc in each htr around, sl st to join. Break off CC yarn. The contrast trim now gives you your RS.

Next rnd: With RS facing, place a marker 9sts before and 9 sts after the lace panel. On this round the lace should be worked between these markers giving an extra repeat at each side. Decrease 1htr at the middle of each underarm by working 2htr together. (Mark these stitches and move the marker as you go, because you will need to decrease and increase at this point through much of the rest of the garment)

Rnd 2 (RS): 2 ch (htr, rtrf, htr) rep around, increase by working 3htr into htr before and 2htr in htr after each underarm marker, sl st to join, turn.

Work in rib pattern without increasing for 8 more rounds.

On hem, with RS facing in CC, 1 ch work one round of dc. Break off CC yarn. Work contrast band and button loop at neck: with RS facing, starting at the left of the back neck opening, in CC, 1 ch, dc into each st around neck, at the right top of the slit, 8 ch, sl into last dc to form a loop to act as a buttonhole, pick up and dc into stitches around the neck opening slit, sl st to join (this is where you will sew on your button) break off CC yarn.

Sew on button and weave in yarn ends. 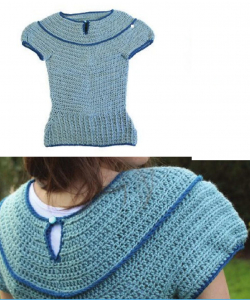