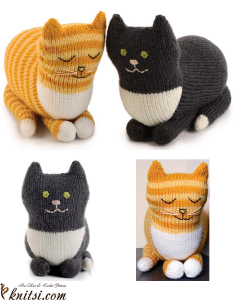 For this project you will need a DK yarn. In the example, Red Heart Super Saver was used. You shall need a total of 155m (170yd) in your chosen colour.

Note that tension is not very important with toys.

Changing yarn weight or needle size will make your finished object smaller or larger. You should work the fabric more densely than you would for a scarf or a garment, so that it holds the stuffing in.

Cast (bind) on 52 sts onto a single needle. Distribute across 3 DPNs, placing 18 stitches on the first two needles, and 16 on the third, and join for working in the round.

Measure off about 25 yards of yarn for finishing the rear and tail later and then cut. Thread a darning needle with a piece of scrap yarn and slip all of the live sts onto it.

Purl back across all sts on the second DPNs only.This will leave your working yarn in between the first and second DPNs, and you are ready to work the short rows.

Short rows are now worked back and forth across these two DPNs:

Continue like this, working one more st before the turn each row, until all but four sts on each end have been worked (3 sts unwrapped on each side). You will end with a Purl row.

Additional sts are now picked up between the end of the second DPN and beginning of the first. Rejoin yarn and with your third DPN, pick up 22 sts, one in each of the remaining cast (bind) on sts. (52 sts.)

Slip the first 7 sts onto your working DPN without knitting them. Thread a darning needle with a piece of scrap yarn, and slip the next 30 sts onto it for working later. You now have 14 sts remaining on 2 DPNs. Transfer some of them to a third DPN for working in the round. With RS facing, rejoin yarn at the first original st on the outer right side of the head.

Cut yarn and thread through a darning needle; thread yarn through remaining sts and pull tight to close. Insert needle down through center of ear and secure to inside.

Place the next 8 sts from scrap yarn at the front of the head onto a DPN. Place last 8 sts from the scrap yarn at the back of the head onto a 2nd DPN. Using Kitchener stitch, graft these 16 sts together to form the area between the ears. Arrange the 14 remaining live sts onto 3 DPNs.The first stitch should be the innermost stitch on the right side of the ear. Repeat all rounds (1-8) for this ear as with the first one.

Sew up any holes, weave in any loose ends, and stuff the head and front half of body. Be sure to stuff the entire chest area very firmly. This will ensure the proper posture for your Parlour Cat.

Return the 82 held sts from the scrap yarn back onto 3 DPNs.

The 18 remaining sts will form the tail. Finish stuffing the cat's body. Knit all sts for 3 inches, working a k2tog at the start of the round every inch or so, until 15 sts rem. Knit all 15 sts for approximately 12.5cm (5in).

Next round: k2tog, k to end of round.

Knit all sts for 1 inch. Cut yarn, thread through remaining live sts. Stuff tail, pull tightly closed, and secure. Hold the tail alongside of the body and seam together at bottom.

Cast on 15 sts onto a single needle. Distribute across 3 DPNs, placing 5 on each needle, and join for working in the round. Knit all sts for 12.5cm (5in).

Cut yarn, thread through live sts, pull tightly closed and secure. Stuff all but about 1 inch at open end.

Fold the closed end of paw inward and stitch to hold in place. Seam leg to bottom of cat's body.

Eyes, nose, mouth and whiskers can be embroidered, painted or appliqued. Make your Parlour Cat as unique as you like!