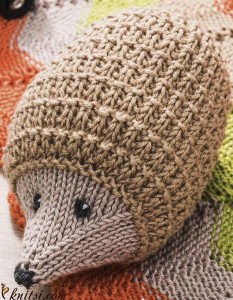 A cute little hedgehog is snuffling about looking for someone to hug. Could that person be a special someone in your life you knit for?

Start with his 'spines' and finish with his nose, then embroider eyes - the twinkle in his eyes is the result of a couple of carefully placed stitches in white yarn.

Approx 15cm long, about 27cm around middle at widest point

Change to yarn B.

Next (and every alt) row Purl.

Cut yarn and thread through sts. Gather round cast-on sts and pull up tightly.

Sew seam for about 10cm. Pull up sts from nose tightly and secure. Sew face seam then along back, leaving a 4cm gap. Turn RS out and stuff with filling, a little at a time. To make eyes, use a length of black yarn to cast on 2 sts, k2tog, cut yarn and thread through sts. Rep with second eye. Pin eyes in position about 3cm back from nose with about 2cm in between. Thread the tail ends through hedgehog and pull through gap in seam. Pull ends up gently then knot tog.

Use a length of white sewing thread to work a couple of small straight sts on top of each other in the top right of each eye. Sew rem seam, adding a little more filling if needed. Tie in all loose ends.