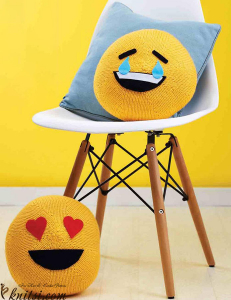 These fun smileys and winkys are a great make for a youngster and are a fantastic on-trend home accessory. Whether it’s a goofy smile or a loving heart eyes, this modern way of communicating gets a plush re-vamp in this project. Why not make some blank cushions and get the kids to choose their favourite expression to stick on with felt?

Using 5mm dpns and yarn A, cast on eight sts. Join to work in the rnd, being careful not to twist

With WS facing, sew the sides of the cushions together, leave an opening large enough for the cushion pad. Insert cushion pad and stitch cover closed. Using images as a guide, cut out felt shapes and glue them into place using fabric glue. If you are giving the cushion to a small child, stitch these pieces into place.

Knit wise: It is important to join the round before you begin knitting, or you will end up with a hole. First, lay your needles on a flat surface and make sure that none of the stitches are twisted. If they are, when you join in the round, you will get a kink in your knitting that you won't be able to undo. Hold the needles so the first cast-on stitch is on your right-hand needle and the last cast-on stitch is on your left-hand needle. Slip the first cast-on stitch from the right needle to the left needle, then move the last cast-on stitch (now the second stitch on your left needle) on to the right needle. Place a marker in the first stitch so you know where your round begins and ends.