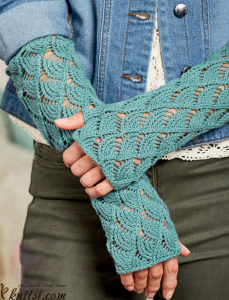 Use a pretty lace shell pattern to create a pair of beautiful mermaid mitts.

These over-the-elbow lace gloves are worked in the round on larger needles, changing to smaller needles for the top of the wrist. Changing needle size produces a slightly more fitted glove on the wrist and hand.

Tip: Extra definition is created by knitting into the back loop of knit stitches, so make sure you don't work with tight tension or you'll find this tricky as the yarn doesn't have much give in it.

Make both gloves the same

Using larger needles, cast on 42 sts, making sure to cast on loosely.

Join to work in the rnd, being careful not to twist. Pm to mark beg of rnd.

Work 2 more full repeats of Lace patt, and then work rnds 1-6 once more.

With 2 smaller DPNs, pick up 10 sts from waste yarn (5 sts top and 5 sts bottom), carefully picking the waste yarn out of the sts with a tapestry needle or spare DPN.

Weave in all ends. Block the gloves to bring out the lacy pattern. When blocking the gloves, stretch out the top of the glove slightly, as required to fit your arm.