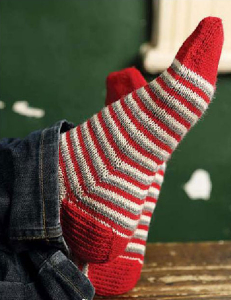 Note: Yarn amounts given are based on average requirements and are approximate.

Use larger or smaller needles if necessary to obtain correct tension.

The socks are worked from the toe up. Sts are cast on for one side of the toe, then more sts are picked up and cast on into the original cast-on sts to form the other side of the toe. These are then joined to work in the round.

Using a new needle, pick up and knit another 14 sts into the original cast-on sts (28 sts). Place stitch marker to indicate beg/end of each round.

Work toe in rounds on 2 needles only.

2 rnds (slipping both markers) until there are 68 sts.

These 2 rnds set striped sequence. Rep last 2 rnds while working incs as set until 92 sts are on needles, ending with a Gusset rnd 2 row in A BUT finish at 2nd marker instead of working to end of round.

Repeat these 2 rows until 12 sts remain, ending with a RS row. Do not turn work.

Pick up and knit 12 sts over heel decreases just made.

Turn, sl 1 and purl across 12 sts picked up and 12 sts remaining for heel.

Now pick up and purl 12 sts down other side of heel decreases, turn (36 sts).

Repeat rows 1 and 2 until all the sts have been used up and there are 36 sts across heel and the original 34 sts across top of foot (70 sts).

Change to B and cont in rounds from start of round marker. Work across top of foot, then across the heel work (k9, m1) 4 times (74 sts).

Next rnd: Knit in B.

Now continue straight in rnds, working striped sequence C, then (A, B, C) a further 3 times or until sock is desired length.

Work in rib as foll:

Cast off in rib.